Hello, everyone! Today on my blog, I am having a promo post for the novel Sixth Prime by Dan O'Brien! Make sure to check it out on Goodreads, Amazon, etc.! 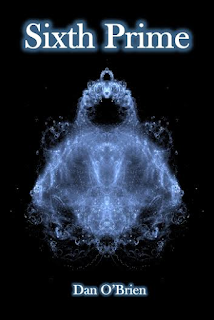 Genres: Science Fiction
Release Date:  July 22, 2016
Check it out on Amazon!
Click Here to go to it's Website!


A war brews as a galaxy struggles to maintain a peace treaty signed in haste. The Commonwealth boasts sprawling cities built upon slums. The Sovereignty has placed the yoke of industry upon its citizens. Sixteen men and women are connected in a way they cannot yet understand. A murder of a prominent artist begins a chain of events that will ultimately determine the fate of the universe. Only thirteen will remain. In the end, there can be only one Prime. Are you a Prime?

Dan O’Brien has written over 50 books––including the bestselling Bitten, which was featured on Conversations Book Club’s Top 100 novels of 2012. Before starting Amalgam, he was the senior editor and marketing director for an international magazine. In addition, he has spent over a decade in the publishing industry as a freelance editor. You can learn more about his literary and publishing consulting business by visiting his website at: www.amalgamconsulting.com.

EXCERPT
*Disclaimer This an unedited from an ARC and is not from the final copy*
The Curious Case of Ale Euclid
Canvases lined the walls. Smudged and erratic strokes revealed a quiet genius encumbered by a great sadness. The darkness of the city ebbed and flowed like the lapping shores of the island on which the sprawling, light-filled metropolis sprawled. The open space in which the somber artist brooded appeared larger than it was by virtue of perspective and the lack of demarcation that so often defined a room.
Ale Euclid suffered from a tendency to check out from his surroundings, imbuing his personal experiences with a special kind of significance felt only by those who wrote the story of their lives with broad strokes of emotional connection. Nyan proved to be the ideal home for his sensitive soul, as it was the embodiment of a tranquil, harmonious culture. Euclid placed a special emphasis on aesthetics, which made island life the ideal backdrop for his inspiration.
The bustling world around him satisfied the collectivistic yearning of his gregariousness, but allowed him to disappear from the crowd behind closed doors, playing to the reserved sensibilities of an artist in the midst of a storm of conflicting and contrasting ideals. Ale had made few friends outside of the small circle of fellow painters and artists who populated the aptly named Inked District of the remote island of Nyan, the largest island in the chain of tranquil isles.
The outer door of the loft space beeped rhythmically, a sliver of light infecting the purposeful darkness of the artist’s studio. Ale did not move, instead remaining motionless and intent on an almost-finished piece he called Constancy, a magnificent creation of the universe reduced by darkness and light battling toward an inevitable end.
Yet, it remained unfinished.
Footsteps crossed the room, approaching the disheveled figure with a splattered brush in hand. “Ale? Are you not ready?”
Ale thought of himself as a quiet, friendly, sensitive, and kind friend. He tried to enjoy the present moment, paying special attention to the joy around him. However, he went to great lengths to carve out his own space, undisturbed mental and physical space where his art could take form. The intrusion, though expected, made him prickle slightly in irritation.
“Mian, you’re early.” He continued to look at his work.
Long and thin like Ale, Mian had gorgeous dark hair that she pulled back into a tight, attractive bun, framing her symmetrical features. The musculature of her legs rippled beneath a thin dress as he shifted her weight from one leg to another. “They are already setting up. Some potential buyers have started to trickle in.”
He sighed. Ale desired only for space and time, much like all of the celestial beings decaying on a molecular level throughout the universe. However, he had made a commitment to Mian, and to the rich of the Ink District, for his artwork to be displayed such that it could be probed and critiqued, purchased and traded like bartered goods.
“I don’t wish to argue, Mian.”
“You’ll find no argument from me, Ale.” She stepped closer to Constancy and pressed a hand to her chest. “This is so evocative. It makes me feel so alone, yet entombed within it.”
Ale stepped forward and applied a single stroke at the center of the canvas, a brush of crimson in the swirling darkness. With a sigh, he stepped away from the painting and pulled a burgundy jacket from a skeletal chair tagged with splotches of color. “This was the last one. We can be social now, as you wish.”
Mian smiled and grabbed the edges of the painting carefully.
Ale placed a hand on hers. “Not this one.”
She looked at him. “Then why did we wait for you to finish it?”
He walked out ahead of her. “I didn’t say it was finished.”

THE AEROPOSTLE GALLERY was lit such that every imperfection was revealed; as such, women painted away their flaws, filling in the gaps so the masks they wore would appear unbroken beneath the harsh luminance. Ale held the door open for Mian, extending an arm as a gentlemanly gesture.
Mian nodded, her features tight as she did so.
Whitewashed features marred by campy paint identified the elite of Nyan, those who would be willing to part with resources for art as a means of solidifying their place in the hierarchy. Some clapped as Euclid entered; others raised a sparkling drink that cost more than the wage of for helium miners on the many moons of Sedecim.
Ale dipped his head.
He moved through the crowd, shaking hands and making small talk, mostly about the state of art in the Inked District and his future projects. You see, Euclid had begun to make a name for himself in Nyan; there was talk of a dispensation from the Commonwealth for his work. He avoided talk of the looming avarice between the Commonwealth and the Sovereignty.
As he gestured toward a gargantuan canvas that depicted a range of colors in an orderly and algorithmic fashion, something caught his attention out of the corner of his eye. Red eyes, flittering in and out of focus, watched him from the shadows.
It gave him pause.
Staring into the darkness, his mouth open, it was not until one of the waxen elite of Nyan cleared his throat did Ale realize that he had stopped mid-sentence in his explanation. “Pardon me, where was I?”
A well-oiled mustache and a single line of azure hair traced back over old skin. Dull brown eyes watched Ale as moist lips and uneven teeth hindered the hard syllables of the man’s speech. “This painting. Why is it so organized? Is art no meant to convey the liberation and lack of inhibition of the soul?”
Ale dreaded this part of being an artist, pontificating at length about his process. In many ways, it was his worst nightmare: having to listen to rude people criticize his personal choices, as well as his art, for prolonged periods of time. None of them seemed to understand how connected an artist was to his work; Ale’s artwork was intrinsically tied to his identity.
“Art is expression, but expression need not be disorganized. I find my inspiration in the orderliness of the universe.”
Another movement caught his attention from the shadows, as if a long coat dusted the edges of the darkness, making a kaleidoscope of fractals; it was the same effect from rubbing one’s eyes too hard.
Another clearing of the throat: this time from the angular and painted clown that hung on the man’s arm. “I find this piece so…dull. Don’t you, honey?” she said, batting her absurdly large fake eyelashes as if to accent her ignorance.
Ale collected himself, not wishing to create conflict despite her snide attitude. “It is meant to be simple; dull might be a consequence for people who lack a certain kind of imagination when they try to experience the work.”
The man snorted and the woman moved on, her attention drawn to an aesthetically pleasing member of the wait-staff with pants that were far too tight. Ale smiled weakly as they moved on, and Mian moved in close, handing him a stout glass of amber-colored liquid.
“You should have brought down the unfinished painting. I think even this crowd would have appreciated the surrealism of it.”
Ale nodded, but remained quiet, contemplative.
He continued to stare into the darkness of the room’s corner, past the crowds of wealthy huddled around splattered paint upon canvas. Part of him knew that the Constancy piece was something different. It was not so much that he had painted the Void, but more that something compelled him to create the abstraction. While Mian saw randomness and surrealism, Ale felt different.
Order prevailed.
Read the rest of the Excerpt by clicking HERE! ;D

That's it for today! Please make sure to check out this book!

Thanks for reading and stopping by!! ;D