REVIEW: The Hobbit By J.R.R. Tolkien

REVIEW: The Hobbit By J.R.R. Tolkien 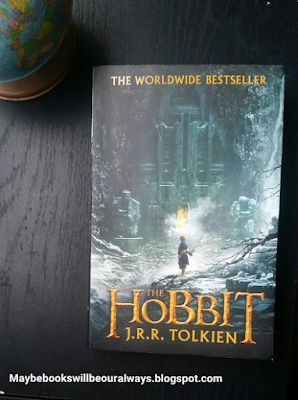 
Pages: 366 pages
Check this book out on Goodreads.
Synopsis (from Goodreads)
In a hole in the ground there lived a hobbit. Not a nasty, dirty, wet hole, filled with the ends of worms and an oozy smell, nor yet a dry, bare, sandy hole with nothing in it to sit down on or to eat: it was a obbit-hole, and that means comfort.
Written for J.R.R. Tolkien’s own children, The Hobbit met with instant critical acclaim when it was first published in 1937. Now recognized as a timeless classic, this introduction to the hobbit Bilbo Baggins, the wizard Gandalf, Gollum, and the spectacular world of Middle-earth recounts of the adventures of a reluctant hero, a powerful and dangerous ring, and the cruel dragon Smaug the Magnificent. The text in this 372-page paperback edition is based on that first published in Great Britain by Collins Modern Classics (1998), and includes a note on the text by Douglas A. Anderson (2001). Unforgettable!

I am a huge fan of the Hobbit movies so, this is a no brainer for me that I had to read this book. And... I absolutely loved this book. At first I was a bit wary of Tolkien's writing style, but I eventually fell in love of it. Tolkien writing style is very different than anything I have read before, and it kind of took me a second to really get into it. I had to really give the time to get the grasp of it. But once I hot used to his writing style I couldn't put it down and have completely fallen love with his writing. After reading this I am totally considering reading his Lord of the Rings trilogy. Don't kill, but before I had absolutely no interest in reading his Lord of the Rings trilogy. Now that I am familiar with his writing style I can't wait to read them!

Let's start first with the characters! I overall loved all the characters! I love learning more in depth about some of them. I have found a new love for Balin. I love how caring, and kind he is. When his peers were wary of Bilbo and weren't very fond of him, he still was very kind to Bilbo. I absolutely admired that. When Bilbo had to go into Smaug's lair, Balin offered to go most of the way with him when the others would not. As the story progressed, you really got to see more about him and his personality. Which, I think the movie adaptations did a bit of a poor job of. I can definitely say that he is my favorite character in this book. Now for Bilbo, I actually didn't really like him at first. His constant complaining really irritated me and just added fuel to my dislike towards him. But as the story continued, we got to see Bilbo change from a hobbit who preferred to be a hermit and spend most of his time in his hole to an intelligent, adventurous hobbit. By the end of the book, my dislike towards him had subsided. Lastly, I love how I got to see what happened to some of the characters. In the movie, it didn't really go into detail about what happened to some of the characters and some stuff you just had to assume what possibly happened to them. Like for example, by the end of the movie I just assumed that Thorin's cousin Dalin took control of a certain something, but after reading this some stuff was confirmed and I figured out answers to my other questions. I think the most surprising was Bard's future. It was a total shocker!!

There was some stuff that I didn't like about this book. The book tended (sometimes) to change perspectives out of the blue with no indication that the perspective were changing. So one second I'm thinking I am inside the mind of Bilbo then all of a sudden he starts saying weird things that just wouldn't make sense coming from his perspective but, then I would realize oh... now I am in the mind of the dragon, Smaug. The other one being that I wished that the book hadn't sped through so fast during the Battle of the Five Armies. It all happened in a span of what felt like two or three pages, and I just wish that I could of read more about it and wished it didn't go so fast. What there was of the battle was also, kind of confusing and I was just left confused about of what just happened. I also wish I could of read about how certain people got injured, etc. Lastly, I wish that there was more of the Wood-elves. That part of the book that they appeared in happened really fast and they did not appear for long. I was really looking forward about seeing them, and was just a little disappointed by that.

Even, though that there was some stuff I wished would had more of, overall this book was phenomenal!! The Hobbit has definitely made it into one of my favorite books and I totally recommend it to everybody! It is quite the adventure!!!

Extra! Here is a picture that I just found funny! 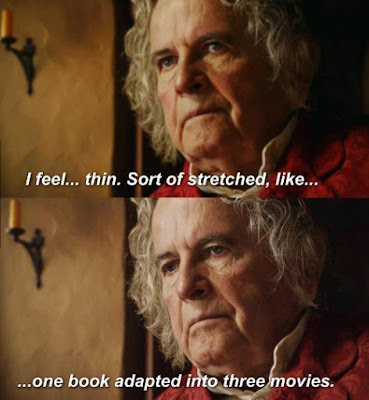 If you would like to see more of my blog in the future, you can either follow Bloglovin, or email!
I will also be posting a giveaway once I reach 150 followers on Bloglovin!!!