Hello, everybody! I am so excited to be part of the blog tour! This is my first ever blog tour that I have participated in! Let's dive right in! Also, thanks so much to the author who gave me a copy in exchange for a honest review! :D 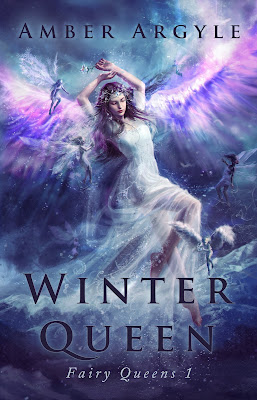 
Pages:  254 pages
RATING: 4 STARS
Check this book out on Goodreads!
Synopsis from Goodreads:~Becoming a winter queen will make Ilyenna as cold and cruel and deadly as winter itself, but it might be the only way to save her people from a war they have no hope of winning.~

Mortally wounded during a raid, seventeen-year-old Ilyenna is healed by winter fairies who present her with a seductive offer: become one of them and share their power over winter. But that power comes with a price. If she accepts, she will become a force of nature, lose her humanity, and abandon her family.

Unwilling to pay such a high price, Ilyenna is enslaved by one of the invaders, Darrien. While in captivity, she learns the attack wasn’t just a simple raid but part of a larger plot to overthrow her entire nation.

With the enemy stealing over the mountains and Darrien coming to take her to his bed, Ilyenna must decide whether to resurrect the power the fairies left behind. Doing so will allow her to defeat Darrien and the other invaders, but if she embraces winter, she will lose herself to that destroying power—forever.

To receive Amber Argyle’s starter library for free (4 books!), simply tell her where to send it: http://eepurl.com/l8fl1

This books took a second for me to really get into, but once I did, I couldn't put it down. As the story began to develop, I became more and more intrigued by it. I really love Amber Argyle's writing style, story telling, and world building. Lets also talk about that cover! It's stunning!

This book follows the perspective of Ilyenna, clanmistress of the Shyle. When the Tryans had attacked friends of the Shyle, they send their men to help. When they come back, with both men from both tribes injured, the Shyle people are overwhelmed. One day, when the Tryans attack again, Ilyenna is severly injured. Fairies come upon her, heal her, and ask her to be their queen. But, there is a catch. In order to be queen, she will have to forfeit her humanity. When she decides to be part of her life a little longer, she is enslaved by the Tyrans. This story follows her, her fight to stop the Darrien's advances towards her, and her fight to save the her people and herself.

The overall pace of this story was fantastic. It didn't go too slow nor too fast. Also, what's really great about this story is that it is action packed. There wasn't a second that something wasn't happening. There is a lot of violence in this book, however. That aspect didn't really bother me, but if you don't necessarily like a lot of violence in books, I would say go in with caution.

The characters were well created and they were just amazing. I absolutely loved how strong and caring Ilyenna is. I love Rone too! He is so sweet and nice! How could you not?!? I was in constant awe on how much Ilyenna helped others no matter how badly they may of treated her, and how Rone would always put Ilyenna before himself. I just absolutely love the relationship between the two!

This overall was a fantastic read! I have completely fallen in love with Amber Argyle's writing and will definitely be checking out the rest of this series and her other books as well!

This Tour is organized by...

The semi short chic   http://Semishort.blogspot.com    Review
Posted by Unknown at 5:13 AM