Review: Forests of the Fae: Devlin's Door By K. Kibbee 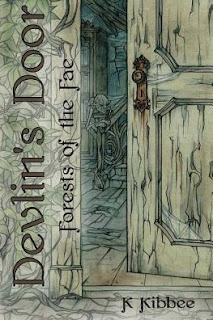 Series: It's a part of a series! Next book comes out in September!
Published By:  Incorgnito Publishing Press
Genres: Young Adult, Fantasy, Mystery
Format: E-Book
Pages:  236 pages
Release Date: January 15, 2016
RATING:   3.5 STARS
Check this book out on Goodreads!
Synopsis from Goodreads:
When thirteen-year-old Anne is sent to spend the summer with her dreadful relatives in a small Washington state town, she is left with little hope that anything intriguing will happen to her. However, when she learns of an abandoned town full of old Victorian homes hidden in the woods nearby, she embraces the lore and becomes bolstered by the idea that an adventure might await.

Her sadistic cousin Lexie feeds Anne's curiosity and leads her to the mysterious town in the woods, where Anne is goaded by her cousin and friends to enter one of the abandoned homes, alone, and is locked inside.

While searching for a way out, Anne stumbles through a hole in the floor and unknowingly falls into an ominous, ghost-filled mystery. As she digs deeper into the secrets of this house, she discovers a weathered journal that reveals a magic-infused history hundreds of years old and a tragic secret: a curse has trapped the town and its inhabitants in a place not meant to be found by humans.

Treacherous fairies, dark worlds-within-our-world, dangerous creatures and a shocking truth all await Anne as page by page, she peels back the mysteries of this chilling town.

From the second I opened this book, I was pulled in. I absolutely love K. Kibbee's take on the entire Fae world. It really pulls the reader in and makes the reader carious about what will happen next. The ending of this was phenomenal. PHENOMENAL! It completely caught me off guard! Kibbee gives this sense that everything is going to be okay at the end. But, then shes like, you thought. This book is actually part of a series! The second book comes out in September and it's called, The Raven Queen! I seriously can't wait!!  Not only would I like to see more of this world from Kibee, I would also just like to in general like to see more writing from her! ;D

This story follows Anne, a thirteen year old who is spending her summer break with some of her relatives. On the train ride there a boy tells her the story of Nowhere Town, a town that supposedly in the past was  once full of people, one day is suddenly disserted. Not a person in sight, still empty of people, and still full of the previous owners belongings. Let's just say everybody stays clear of Nowhere town. No one still really knows why the people went up and left. This pokes at Anne's curiosity and decides that eventually she will visit and investigate the so called Nowhere town. She gets her chance to investigate when her cousin and her cousin friends invite her to tag along. They end up abandoning her there in a house that they succeeded in locking. Anne, left all alone, begins to look for a way out, while also looking at what is in the house. She stumbles across a journal that dates back to the 1920's. As she reads through the journal, entry by entry, the mysterious Nowhere Town comes to life.

I gave this book 3.5 out of 5 stars.
I received this book in exchange for a honest review.

Thanks so much for reading!!
Have you read this? Your thoughts?  Tell me down in the comments!

If you would like to see more of my blog in the future, you can either follow Bloglovin, or email!
I will also be posting a giveaway once I reach 150 followers on Bloglovin!!