REVIEW: SuperNova: Heroes of Arcania by Liz Long {3 out of 5 Stars}

REVIEW: SuperNova: Heroes of Arcania by Liz Long {3 out of 5 Stars} 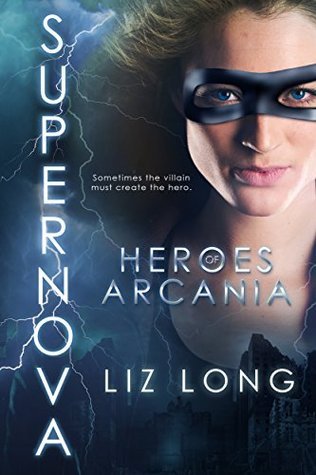 Series: Heroes of Arcania
Genres: Young Adult
Format: eBook
Release Date:  June 16, 2016
RATING:  3 out of 5 STARS
Check this book out on Goodreads!
Synopsis from Goodreads:
The streets of Arcania are overrun with crime, deteriorating as a madman named Fortune makes himself at home. He shows no mercy, striking down anyone in his path – including Nova Benson’s little sister. Devastated, Nova vows to seek justice for her family, but aside from her freak strength and impenetrable skin, how is she supposed to stop a monster like Fortune?

Cole Warner wants to help people. Entrusted to keep his family’s secret, he’s also frustrated at having to hide his gift. He knows he could do more to help in the fight against Fortune. If he could convince his sister Penelope to join him, they might even have a chance at beating him. When Cole meets Nova, he realizes his whole world is about to change. And he’s going to welcome it with open arms.

Falling for each other wasn’t part of the plan.

Then again, neither was becoming a superhero.

I received a copy in an exchange for a honest review.

The author does an amazing job at helping the reader visualize this world as if it was actually playing out right in front of your eyes. The moment I began reading this book, we were automatically thrown into action and got straight to the point (which I love)! I enjoyed the plot and like this book.

The only issue I had with this book was that sometimes I felt like the characters didn't have appropriate reactions to the things playing out in front of them. Their reactions didn't just really feel like they were realistic sometimes. Things would happen that would shake anybody up, surprise, or fill someone with joy, etc. Superhero or not, anybody would have these feelings. Like when a character had revealed his powers in an intense scene, nova didn't really seem shocked. Even though she hadn't shown any indication that she was suspecting that character of having superpowers. So, why wouldn't she be shocked, right? Especially since she thought she was the only person (besides the villain) who had these powers. There were multiple instances in this book where this popped up but, I really did like this book. :)

This book had awesome action, and plot! If you are really into superheroes then you should totally check this one out!